According to reports, Ify health has gotten the doctors to have her womb removed and buckets of fluids drained from her tummy.

The actress was allegedly diagnosed with cancer about five months ago yet and is reportedly aggressive.

Ify is currently undergoing chemotherapy and has already spent millions on her treatment so far.

Chieshe made news in March 2018 when she made an outlandish claim that a mysterious snake swallowed about N35million cash arising from sale of e-JAMB cards in the state.

The controversial JAMB official is being prosecuted by the EFCC on an eight-count charge, following her refusal to furnish the management of JAMB the true information on the financial status of JAMB e-cards supplied to the Benue Zonal office between 2014 and 2016. Chieshe’s action is contrary to Section 139 (a) of the Penal Code Law.

Kanye West donated the cash as a gift from him and the couple’s four children, North, Saint, Chi and Psalm.

Kim Kardashian has revealed that her husband Kanye West donated $1m to charity as part of her gift for her 39th birthday.

The reality TV star posted a message on her social media accounts following her celebrations on Monday.

“I got amazing gifts from my whole family and Kanye [got] me the most amazing bags,” she said. “But he also donated $1 million to my favorite charities that work so hard on prison reform on my behalf from him and the kids. This makes my heart so happy!”

I got amazing gifts from my whole family and Kanye for me the most amazing bags. But he also donated $1 million to my favorite charities that work so hard on prison reform on my behalf from him and the kids. This makes my heart so happy! 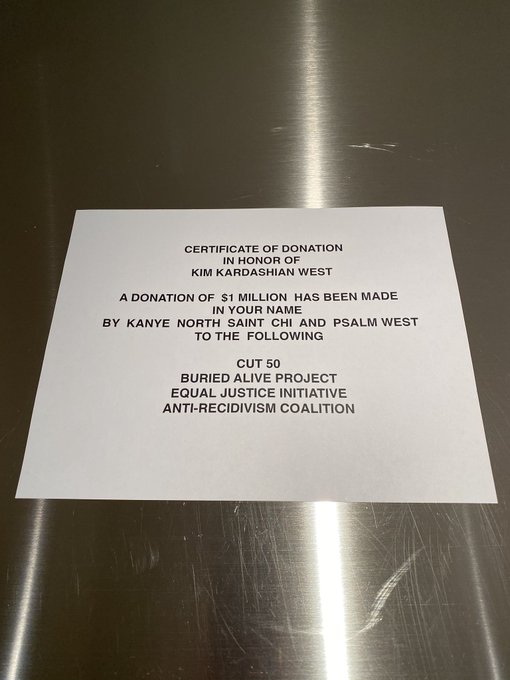 A photo of the donation certificate showed the money has gone to Cut 50, the Buried Alive Project, Equal Justice Initiative and the Anti-Recidivism Coalition, as a gift from West and the couple’s four children, North, Saint, Chi and Psalm.

Kardashian said she had had the “best most relaxing birthday ever” following a weekend in Palm Springs with her friends and a family dinner thrown by West and her mother, Kris Jenner.

Thank you so much for all of the birthday love! I had the best most relaxing birthday ever! Spent the weekend w my amazing friends in Palm Springs and then had a family dinner at my house tonight thrown by my mom and Kanye.

The Keeping Up With The Kardashians star started studying law last year after lobbying the White House for clemency for Alice Marie Johnson, who served more than two decades of a life sentence without parole for non-violent offences.