“The highs and lows of cartooning. Today I was just let go from all newspapers in New Brunswick,” De Adder tweeted. He later clarified that he had technically been under contract to work for Brunswick News Inc., and wasn’t an employee who could be fired.

Brunswick News Inc. responded in a statement on Sunday that “it is entirely incorrect to suggest” that it canceled a freelance contract with de Adder over the Trump cartoon. “This is a false narrative which has emerged carelessly and recklessly on social media,” the publishing company wrote.

De Adder tweeted that he would bounce back from losing the job and that he just had to “recoup a percentage of my weekly income.

“If it was done at the end of a gun, it would be denounced before the International Criminal Court,” the U.N. human rights commissioner said.

LONDON — Caroline Nyandat will never forget the day she watched a 14-year-old girl die due to complications from an unsafe abortion.

Nyandat, 36, was then completing her training as a nurse midwife in Kisumu, Kenya, when the teen was in need of surgery but suffered from sepsis before doctors in the hospital could react.

“That’s when it struck me that I need to be trained so that I’m able to handle such cases,” she said.

That was more than a decade ago, and Nyandat has since become an abortion care provider. Despite the progress she made helping women in Kisumu access safe reproductive health care, Nyandat fears women are returning to dangerous back alleys or at-home methods to terminate pregnancies.

Global health campaigners warn that decisions made in Washington are making conditions worse for women around the world and could be responsible for more than half a million unsafe abortions and thousands of deaths each year.

Marginalized women are the ones who are dying and this gag rule does exactly the opposite of what it should be doing, which is protecting life.

In January 2017, President Donald Trump re-instated the Mexico City Policy, widely referred to as the Global Gag Rule, which prohibits federal funding for the delivery and promotion of abortion care services overseas. While previous administrations applied the rule specifically to family planning and reproductive health spending, Trump expanded its coverage to all U.S. global health assistance.

And in March this year the policy was expanded again to prohibit the funding of any group that promotes or provides abortion. “American taxpayer dollars will not be used to underwrite abortions,” Secretary of State Mike Pompeo said.

That policy is now affecting the distribution of nearly $9 billion in U.S. global aid.

Marie Stopes International, the largest sexual and reproductive health organization in Kenya and a significant operator in 36 other countries around the world, did not agree to the gag rule, which resulted in a shortfall of $50 million in funding this year. It estimates the consequences of service cuts will lead to 1.8 million unintended pregnancies, 600,000 unsafe abortions and 4,600 maternal deaths globally.

Nyandat is seeing the effects of the policy firsthand working with the Kenyan health and education nonprofit Kisumu Medical and Education Trust — a group that before the changes to the rules was a recipient of U.S. aid.

“The fear is women will be denied services, and in that denial, we will push them to the wall where we start having high maternal (mortality) cases because of unsafe abortions,” Nyandat said. “Women will always find an alternative to get this service.”

About 63 percent of pregnancies in Kenya are unplanned and occur for reasons similar to many other countries — lack of sexual education, social pressures to have sex, early marriage and rape, Nyandat said.

Because of the policy, countless women have lost access to emergency contraception — such as the morning-after pill — and the availability of regular contraception has become erratic, Nyandat said.

The resulting heightened risks for unintended pregnancies coupled with fear to even ask about abortions because of the perceived stigma will lead desperate women to take matters into their own hands, Nyandat said.

Studies on past iterations of the gag rule support her concerns. The World Health Organization found that in sub-Saharan African countries, rates of abortion were 1.2 times higher and the use of contraception decreased under President George W. Bush’s reinstatement of the policy, compared with the administrations before and after that revoked it.

It’s not just abortion care that is being affected.

A study released last month by the International Women’s Health Coalition found that the policy is having wider implications on women’s health by reducing access to other health services like HIV treatment and support for gender-based violence — putting women’s lives at risk.

One program affiliated with Planned Parenthood, which provided girls in Kenya a range of free health services including testing and treatment for malaria and tuberculosis, was forced to shut down, according to Jedidah Maina, a health advocate who contributed to the report.

The United States remains committed to helping women and their children thrive, particularly in countries where the need is greatest.

“Marginalized women are the ones who are dying, and this gag rule does exactly the opposite of what it should be doing, which is protecting life,” said Maina during a conference on women’s equality in Vancouver, British Columbia, last month.

The ripple effects from the confusion of navigating health systems as services close to the decline of referrals to abortion-providing organizations — including those that are publicly funded — are being felt even in countries where abortion care is legal.

In South Africa, civil society groups providing technical expertise to the government’s review of the public school curriculum fear to mention abortion in case it affects their funding, according to Vanessa Rios, who contributed to the report. It means the gag rule will guarantee the elimination of abortion education, despite that the right to the service is protected under South Africa’s constitution.

“The policy is really undermining governments’ ability to drive health policies and priorities,” she said.

Nyandat has similar concerns that the policy will take a toll on young people in Kenya, leaving a gap in their sexual health education that will take years to bridge — even if the policy is revoked. “I think it will take us time to really bring the younger generation back on track … and realize that abortion care services is part of human rights,” she said.

The U.S. Agency for International Development did not directly address criticisms that the policy is contributing to maternal deaths and increased abortion rates.

“As the world’s largest bilateral donor to global health programs, the United States remains committed to helping women and their children thrive, particularly in countries where the need is greatest,” an agency spokesperson said in a statement to NBC News.

The “vast majority” of foreign nongovernmental organizations subject to the policy have agreed to the conditions, the statement said. For those that have refused, “USAID has worked to transition the activities to other highly qualified partners while minimizing disruption of services,” according to the statement.

The spokesperson added that the State Department and USAID are monitoring the policy and a final review of its implementation will be released in the coming months.

But experts say the evidence is clear and they are calling the policy an attack on human rights.

“This is a politics designed to erode the fundamental integrity of women and girls,” said Kate Gilmore, United Nations deputy high commissioner for human rights. “If it was done at the end of a gun, it would be denounced before the International Criminal Court.”

Gilmore said the policy flies in the face of science and is using faith and belief to craft laws that restrict the right to medicine.

“What is odd here is this is not a familiar conservative politics. This is something much more noxious,” she said. “This disregard for evidence and for truth is so deeply troubling.”

Other international donors, including Canada, Sweden and the Netherlands, have stepped up to bridge the funding gap left by the United States. Canadian Prime Minister Justin Trudeau announced in Vancouver on June 4 that the country would increase its funding for sexual and reproductive health care to $700 million by 2023 from $400 million.

“This should not be a political issue. These divisions are playing out globally with devastating consequences, and women deserve better,” he said.

Lawmakers in Washington are also fighting the policy. On June 19, the House of Representatives passed a health spending package that fully repeals the global gag rule while protecting Americans’ access to birth control, cancer screenings, testing and treatment of sexually transmitted diseases, and other aspects of reproductive health care under Title X.

The legislation still requires the support of the Senate and president.

There are signs of broader support. Another bill aimed to permanently repeal the gag rule, put forward by Sen. Jeanne Shaheen, D-N.H., earlier this year has received bipartisan support.

But the changes are far from becoming law, and Shaheen said she’s calling on more Republicans to recognize the “damage” being done.

“The Global Gag Rule is … an ill-conceived, shameful policy that’s jeopardizing the health and safety of women and their families in some of the most vulnerable regions of the world,” Shaheen said in a statement to NBC News.

Despite the evidence and outcry against the policy both at home and abroad, Jonathan Rusk, senior director of policy and advocacy at PAI, said the Trump administration “doesn’t care” that it has undermined diplomatic relationships and donor priorities.

Instead, the policy plays to the Trump base. “This is about access to contraceptives and the choice that affords women and girls,” Rusk said. “This is, in some cases, the single issue that this base votes on.”

In March, Secretary of State Mike Pompeo announced further expansion of the policy to apply to any organization receiving U.S. funds, even if it’s abortion-related services were being separately funded by another entity.

Health workers say the consequences extend beyond funding. Marta Royo, executive director of Profamilia in Colombia, said the gag rule is spreading the anti-abortionist ideology globally, and she and her colleagues are closely watching how the debate unfolds in the U.S. in anticipation of having to pick up the fight at home.

“Now we all know where Alabama is … because we have to learn, we have to try to protect that from happening and replicating in our countries,” she said.

“They’re moving away from just posting videos online,” she said, adding that groups have organized and held meetings to lobby government officials. Staff at clinics and throughout her organization have also reported increased harassment and intimidation.

Nyandat, the Kenyan nurse midwife, said she’s been personally attacked as well. “I had a scenario where some of my friends actually told me I will be going to hell,” she said.

While these incidents have made her question her work, she said she reminds herself of the alternative. “What is worse is leaving a woman to die,” she said.

The toddler’s mother said she last saw the boy in their Buckroe Beach area mobile home at about 1 a.m. Monday.

Sult said Tuesday that investigators were “considering everything from the child just walking away” to foul play. But by Wednesday, he said they had done a thorough search of the “isolated” area near the boy’s home, come up with nothing and “extended (the search) well beyond the range a toddler could walk.”

He said some crews were 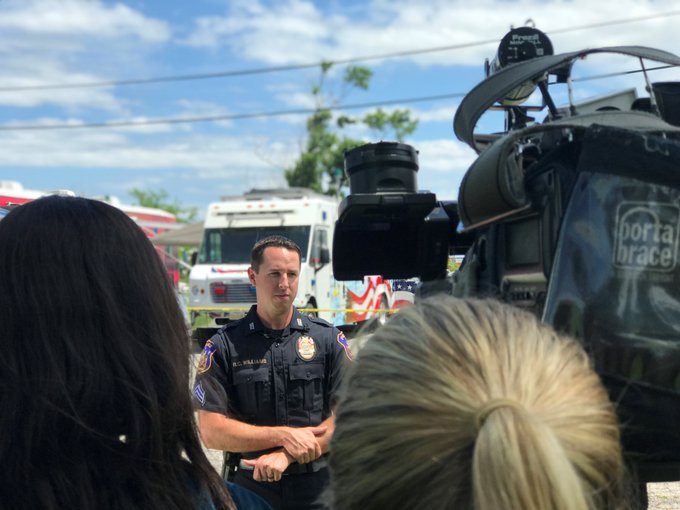 focusing on a landfill about 10 miles from Noah’s home, while others had extended the search beyond state lines.

“We’re not ruling anything out until we find the child,” Sult said.

Noah was last seen wearing a white and green pajama shirt and diaper.