Serena Williams eased into the third round of the Rogers Cup in Toronto with a straight-set victory over Belgium’s Elise Mertens.

Ashleigh Barty’s second-round defeat saw her surrender her eight-week reign as world number one, with Karolina Pliskova also in the running to take over at the top.

Czech third seed Pliskova beat American Alison Riske 6-4 6-7 (4-7) 6-2 to set up a meeting with Anett Kontaveit in the next round.

Belinda Bencic – champion in 2015 – beat Julia Goerges in straight sets but there were defeats for Victoria Azarenka and Caroline Wozniacki.

Eighth seed Williams – playing in her first match since losing the Wimbledon final – last won the title in 2013 and is using this year’s tournament as a warm-up for the US Open, which starts on 26 August, where she will go for a record-equalling 24th Grand Slam title.

After a slow start, in which Mertens went an early break up, world number 10 Williams fought back to win five consecutive games before serving out the opening set.

In the second set, 23-year-old Mertens broke Williams’ serve at the first opportunity but Williams quickly responded and went a double break up.

She sealed the match on break point with world number 20 Mertens having made eight double faults and 19 unforced errors in the match.

“I feel like my movement is great,” said Williams. “[I’ve] been working on my fitness, so I felt like it really was able to shine through.”

After 36 games, 106 goals, 84 yellow cards, and plenty of VAR controversy, 24 teams have been whittled to 16 and the pressure now turns up a notch or two at the Women’s World Cup.
The big-hitters have come through their opening tests unscathed, though there have been a few headlines along the way, while all four debutants — Jamaica, Chile, South Africa and Scotland — have now departed but left their mark nonetheless.
From record-breaking matches to empty seats and ferocious debates, a lot has been learned from the group stages of the Women’s World Cup.

US still the ones to beat

Would Thailand or Jamaica have been able to compete in France without outside investment? The answer to that would be an emphatic no. That national teams rely on wealthy benefactors rather than support from their federations should compel FIFA, the sport’s governing body, to do more.
US striker Morgan said after the victory over Thailand that she hoped that the 13-0 scoreline “encourages FIFA to put a bit of pressure on those respective federations to put more efforts into their women’s sides.” More investment is certainly needed. Urgently.

Scotland’s Lee Alexander wipes away the tears after the 3-3 draw with Argentina.
During the opening weeks of the tournament, a number of interesting debates have been had.
How much should a team celebrate scoring when thrashing minnows? Why don’t all federations support the women’s game? Also generating tweets and headlines are goalkeepers and VAR (Video Assistant Referee).
Three penalty kicks have been retaken at this summer’s tournament so far after VAR ruled that goalkeepers did not have at least one part of their foot on the goal line.
While FIFA has yet to comment publicly on the penalty controversies, it is clear that officials are simply following the laws imposed by the sport’s rule-making body, the International Football Association Board.
“We need to talk about this rule and the way it’s impacting matches,” Hope Solo tweeted after Scotland goalkeeper Lee Alexander was penalized by the video assistant referee after her dramatic penalty save during her team’s game with Argentina Wednesday.
Endler’s outstanding second-half performance against the US garnered praised around the world.
Goal dimensions have also been discussed during the opening weeks of the tournament. Player-of-the-match performances from Argentina’s Vanina Correa and Chile’s Christiane Endler suggest goal sizes are fine as they are.
But in a column in the English newspaper The Times, Chelsea manager Emma Hayes remarked that “no one ever thought to question whether it makes sense” for goal sizes to be the same for both the men’s and women’s game.
Female goalkeepers have long been the subject of mockery by those who wish to pour scorn on the women’s game, but goalkeeping standards have undoubtedly improved in recent years. But, as Katie Whyatt wrote in her column in the English newspaper the Daily Telegraph on the debate: “We should at least have this debate, with nuance. To dismiss Hayes’s suggestions out of hand does everyone a huge disservice.”
READ: The South American footballers who fought for change 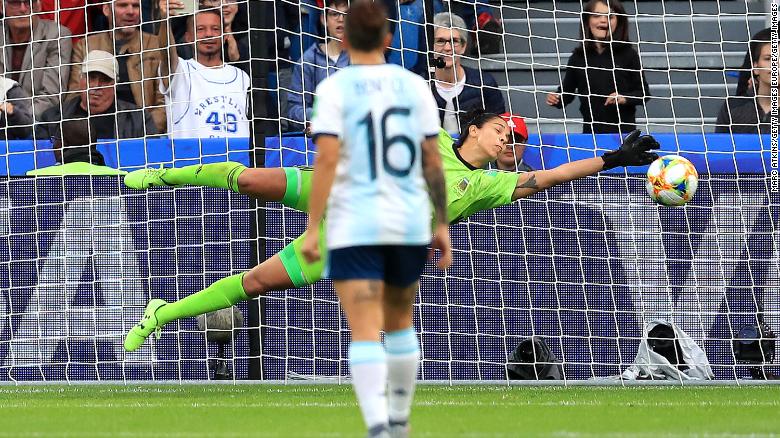 Correa saved a penalty against England and produced a string of fine saves against the world’s No.3-ranked team.

A sell out is not necessarily a sell out

FIFA, the sport’s governing body, has declared that ticket sales have exceeded the 1 million mark (1.3m were sold in Canada four years ago), but empty seats have been a feature of the early stages of the tournament, even in matches billed as sold-out by FIFA.
Only 13,000 people turned up to watch England versus Scotland on the opening weekend in Nice’s 35,000-capacity stadium, while empty seats were visible for US versus Thailand — one of the 14 sold out games, according to FIFA, in this 52-match competition.
FIFA told CNN Sport that vacant seats at sold out games could be attributed to no-shows.
“Generally speaking when it comes to FIFA competitions, there is always potential for a certain discrepancy between the expected attendance and the actual match attendance,” said a FIFA spokesperson. “Such discrepancy is mainly due to ‘no shows,’ which can be linked to different factors such as negative weather conditions, travel constraints or the personal decisions of fans.”
With tickets available from nine euros for some matches, has the cost of not attending matches been made inconsequential? Poor promotion of the game in Paris has also been criticized, with advertising of the French Open — which was being held in the city up until June 9 — more prominent than a tournament being billed as a game-changer for women’s sport.

If ticket sales have not been an outright success, at least the group stages have enjoyed blockbuster global television figures.
French free-to-air broadcaster TF1 has said a peak audience of more than 10 million watched France’s opening match against South Korea, the most ever for a women’s match in the country. At last year’s World Cup in Russia, 12.6 million tuned in to watch France take on Australia in the opening game.
England versus Scotland attracted a peak audience of 6.1 million on the free-to-air broadcaster the BBC, making it the most watched women’s soccer game of all time in the UK. Fox Sports has experienced a 11% rise in viewership compared to the 2015 tournament, this despite the unfavorable time zone.
In Brazil, this is the first Women’s World Cup to be broadcast on the country’s main TV channel, Globol, and Brazil’s opening match against Jamaica averaged 19.7 million viewers. Millions have also tuned in in Italy, the Netherlands, Argentina and Germany, while in China, an average of 12 million reportedly watched the country’s opening match live on CCTV.
FIFA hopes a billion tune in to watch on television but, then again, it did hope that 1.3 million tickets would be sold.
Post Views: 0