We all thought Chris Gayle’s 301st one-day game for West Indies would be his last – except for the man himself.

Gayle, 39, scored 72 in his side’s defeat by India in what had been expected to be his final match.

But the batsman – who recently surpassed Brian Lara’s ODI run record, which now stands at 10,481 – is playing on “until further notice”.

In June, Gayle reversed his original decision to retire after the World Cup.

Gayle, who usually wears the number 45, wore a specially-printed shirt with the number 301 on the back at the third ODI against India at the Queen’s Park Oval.

Gayle left the field waving his bat aloft, soaking up the warm and prolonged applause from the crowd, a gesture indicating that would be the last time he would be wearing West Indies colours.

India captain Virat Kohli’s impressive 114 helped his side to a six wicket victory on the DLS method, and he was also swept up by the occasion, gushing about how Gayle was a “gem of a human being” and “always kind” as a tribute to his former Royal Challengers Bangalore team-mate upon his retirement.

But retired-not-retired Gayle said after the game: “I didn’t announce any retirement.”

The question you’ve all been asking..has @henrygayle retired from ODI cricket? 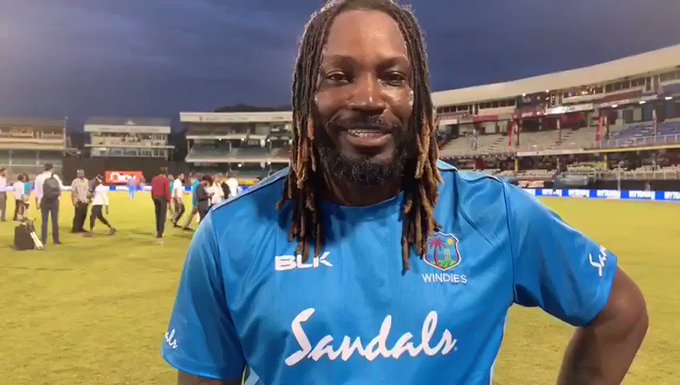 178 people are talking about this
Report

West Indies captain Jason Holder said: “To my knowledge, he [Gayle] has not retired.

“But today was an example of his career. He was entertaining, he showed presence, and that’s just what people have come to expect of Chris Gayle over the years.”

Prior to the World Cup, Jamaican Gayle also revealed he wanted to play in an upcoming Test match against India on home soil, but he has not been selected in the squad.

Rafael Nadal clinched an emotional Davis Cup victory for Spain over Canada when he beat Denis Shapovalov in front of a jubilant home crowd in Madrid.

The youngster saved two match points with blistering back-to-back winners and fashioned a set point of his own, but finally succumbed when he netted a forehand.

Nadal dropped to the ground before being mobbed by his team-mates. When he finally got to his feet, he held aloft Bautista Agut in a tight embrace as the cheers rang out.

“I could not be happier. It has been an unforgettable moment in this amazing stadium; we can’t thank the crowd enough. Our team spirit prevails.”

Bautista Agut puts aside grief to deliver for Spain

While Nadal’s victory settled the title, it was Bautista Agut’s performance so soon after his bereavement that heightened the emotions.

Bautista Agut went home on Thursday after his father was taken ill. The Spanish federation later announced the player’s dad had died.

But the world number nine returned to Madrid to watch his team-mates beat Great Britain in the semi-finals on Saturday before being recalled for the final.

The 31-year-old, whose mother died last year, pointed to the sky after claiming victory when Auger-Aliassime went wide on the first of three match points.

He hugged his captain Sergi Bruguera before leaping into the arms of his delighted team-mates in the stands.

“It was very special feeling on the court and I just could go out to try my best, give my best,” he told Eurosport.

“I am very happy I could win the first point for Spain.”

Auger-Aliassime was playing his first match at the revamped tournament this week after an ankle injury, with Canada reaching their first final by using just the same two players in all of their singles and doubles matches – Shapovalov and Vasek Pospisil.

Liverpool’s dramatic penalty shootout victory over Arsenal sealed their place in the quarter-finals of the Carabao Cup after 10 goals were scored in a thrilling contest at Anfield.

The Belgian lives for the big moments and his two goals in the second half – a slick turn and strike and an exquisite scissor kick volley – always seemed likely.

Origi secured legendary status among Liverpool fans last season when he scored the winning goal on aggregate against Barcelona in their Champions League semi-final second leg.

He then secured Liverpool’s victory in the final against Tottenham, putting his side 2-0 up with three minutes to go.

And after his heroics at Anfield on Wednesday night, the home fans sang his name as the players prepared for the penalty shootout.

Ozil must start for Arsenal

Ozil has been out of favour with manager Unai Emery but took his chance on Wednesday having not appeared in Arsenal’s last seven games.

The midfielder brought quality, experience and creativity to the team and was involved in two of their five goals.

Arsenal’s results in the Premier League this season have been inconsistent and his exclusion has been a mystery but Emery admitted he was “back helping us with his quality and his spirit” at Anfield.

The Gunners sit 12 points behind league leaders Liverpool and after Sunday’s disappointing draw with Crystal Palace – the second time in as many games they have dropped points from winning positions – surely a return to the starting line-up for Ozil isn’t too far away.

‘What they did – I lost it!’ – the managers’ reactions

Liverpool manager Jurgen Klopp on Sky Sports: “We made some mistakes, we played some average passes. We were too open at times. We can talk about tactics but who cares on a night like this? I hoped for the boys they would have a game to remember. What they did – I lost it really!

“It’s like a dream to play for the first time at Anfield, but things might not be going right and you have to stay on track. All our goals we scored were wonderful. If you don’t win nobody remembers it in three years, if it works out the boys will remember it forever.

“[Curtis] Jones… it was not my decision in the end for him to take the last penalty. When I saw the list, Origi was the taker of the last one and they changed it obviously.”

Arsenal manager Unai Emery on Sky Sports: “It was a crazy match. I am very proud of [the players’ work], we had a high rhythm in the first 45 minutes. At the end we were winning until the last action. Penalties are 50/50 and we lost.

“We are sad but our work, we deserve to have more. There are lots of positives to take. Defensively, both teams cannot be happy with that. But for the supporters it was an amazing 90 minutes. The result was always changing. It was spectacular.”