Hong Kong airport has resumed operations after a night of chaos which saw protesters clash with riot police.

Hundreds of flights were cancelled on Tuesday after protesters flooded the terminal buildings.

Early on Wednesday flights appeared to be running as scheduled, though some still remained delayed or cancelled.

After days of disruptions, the Airport Authority said it had obtained a temporary injunction banning protesters from entering certain areas.

It said in a statement that people would be “restrained from attending or participating in any demonstration or protest… in the airport other than in the area designated by the Airport Authority”.

Additional security measures have been put in place restricting access to the terminal – with only staff and passengers with valid boarding passes allowed in.

Hong Kong is in its tenth week of anti-government protests.

What happened at the airport on Tuesday?

The airport, one of the world’s busiest, has been the site of daily protests since last Friday but they had been mostly peaceful.

Some protesters held signs apologising to passengers for the inconvenience caused by their demonstrations.

However, things escalated when one man was set upon by protesters reportedly because they thought he was an undercover police officer.

Police, wearing riot gear and brandishing truncheons, later arrived at the airport and clashed with protesters.

In one video, a policeman is seen frantically drawing his gun on protesters after being attacked with his own truncheon for manhandling a woman.

Hong Kong police said the officer’s life was “under great danger” and insisted he only drew his gun “out of emergency and necessity” and “exercised great restraint”.

Protesters had boxed him into a corner after prying the baton from his hands during a violent skirmish. After collapsing to the ground, the policeman was eventually dragged to safety by his fellow officers.

At least two other men, also suspected of being police officers, were also confronted by protesters. One was held for several hours and his hands zip-tied. Paramedics were initially blocked from evacuating the man, even as he appeared to lose consciousness.

The actions came after Hong Kong police admitted on Monday that disguised officers were being planted among anti-government protesters.

The editor of Chinese state media outlet the Global Times later said one of the men attacked was a reporter from the outlet.

Fu Guohao, reporter of GT website is being seized by demonstrators at HK airport. I affirm this man being tied in this video is the reporter himself. He has no other task except for reporting. I sincerely ask the demonstrators to release him. I also ask for help of West reporters 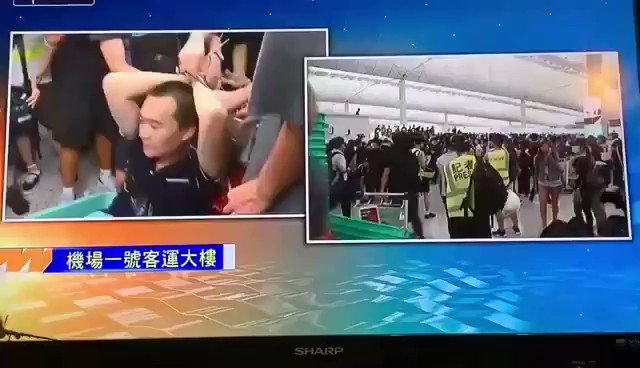 2,000 people are talking about this
Report

The BBC’s Asia-Pacific editor Michael Bristow says Chinese censors are allowing a video of the reporter’s ordeal to be shared in mainland China, where news of the Hong Kong demonstrations is strictly controlled.

On Wednesday, police likened the treatment of the men to “torture” and said they had arrested five men.

Overnight, protest groups issued online apologies for the violence, saying they were “scared” and appealed for help.

Some also handed out apology leaflets and chocolate to people arriving at the airport’s train station.

Separately, the Hong Kong-based Cathay Pacific airline has fired two pilots for protesting after China demanded that they suspend personnel involved in the demonstrations.

At the scene: “Fight for freedom”

“Fight for freedom, stand with Hong Kong” could be heard clearly in the arrival hall on Tuesday. Protesters were handing out posters to arriving tourists about what had happened in the past two months in Hong Kong, particularly an incident that happened on Sunday in a police dispersal action.

A female protester was shot in the eye by police with a bean bag projectile.

Occasionally, there were “mini-parliaments”, where hundreds of protesters gathered and discussed what was next and how to encounter some possible scenarios in a peaceful manner. Everybody got their say as long as they raised their hand.

Tourists undoubtedly were affected as they were not able to get into the security check area. Some cried, some chose to sleep through it. But some protesters offered to help them, including looking for accommodation, offering free food and drinks, and certainly apologising to them.

What has the government said?

The Hong Kong government has condemned the violence at the airport, saying it would take action against those found responsible.

In a statement on Wednesday, it called the “violent acts… outrageous” and said that they had “overstepped the bottom line of a civilised society”.

It added that the police would take “relentless enforcement action to bring the persons involved to justice”.

China’s Hong Kong affairs office condemned on Wednesday what it called “near-terrorist acts” at the airport.

Anti-government protests started in June in response to a proposed extradition bill, which has now been suspended, but have evolved into a more demanding pro-democracy movement.

Chinese exports rose unexpectedly in July, beating expectations for a fall, as trade tensions with the US continued to simmer.

Still, analysts tip China’s economy will remain under pressure as Washington prepares to hit Beijing with a fresh round of tariffs next month.

The US has vowed to impose duties on $300bn (£246bn) worth of Chinese products on 1 September, after long-running trade negotiations between the two countries broke down.

Tensions between the world’s two largest economies intensified this week after the US officially named China a “currency manipulator” following a sharp drop in the value of the yuan against the US dollar.

The People’s Bank of China said on Monday that the slump in the Chinese currency was driven by “trade protectionism measures and the imposition of tariff increases on China”.

On Thursday, the PBOC set its official yuan midpoint below the key 7 level to the US dollar for the first time since 2008.

But the trading point was firmer than traders had expected, and was seen as a signal that authorities wanted to stabilise the decline in the currency.