BA cancels 27 Sept flights ahead of next pilot strike

British Airways has started emailing passengers to cancel flights two weeks ahead of another strike by pilots.

A spokeswoman for BA said the decision had been made “to give customers as much certainty as possible”. Passengers were being offered a full refund or to rebook on an alternative date or airline.

“We are very sorry that Balpa’s actions will affect thousands more travel plans,” she said. “We urge them to call off their strike and return to negotiations.”

The airline had previously estimated the strike would cost it £40m a day.

Balpa called the decision to cancel flights “irresponsible and inconsiderate to its customers” and said it was a strategy designed to save the airline money.

By giving passengers two weeks’ notice, the airline avoids having to pay compensation.

Balpa said it had set the second strike period at the later date to allow time for negotiations to take place, but that BA had not responded to its latest proposals.

The union said it had given BA “multiple opportunities” to work with them to avoid the strike.

British Airways (BA) has offered pilots a pay rise of 11.5% over three years, which it says would boost the pay of some captains to £200,000.

However, Balpa says many of its members earn much less than that, with new pilots starting on less than £30,000.

When BA cancelled flights a fortnight ahead of the two-day strike earlier this week, it mistakenly cancelled extra flights as well.

The airline was forced to draft in extra customer relations staff over the August bank holiday weekend to deal with hundreds of thousands of phone calls and messages, after customers found they could not get through to change their flights.

Amazon workers praising their working conditions on social media are being accused of lying by other users.

Earlier this month the same account holder said he was grateful to have been able to take a week of absence by using annual leave and sick days.

Sceptical Twitters users accused the accounts of posting scripted messages in the guise of real experiences.

“Every single tweet by one of those ‘Amazon FC Ambassadors’ has the exact same energy as someone answering the door with a gun to their head, and telling the cops that everything is fine,” wrote one critic.

When asked why she tweeted, @AmazonFCHannah replied: “I get to do this two days out of the week so I get a break from work. Last group of Ambassadors got a gift card, so I might get one of those too.”

thank you to amazon for employing 19 year old grandma Rafael, who is 100% real 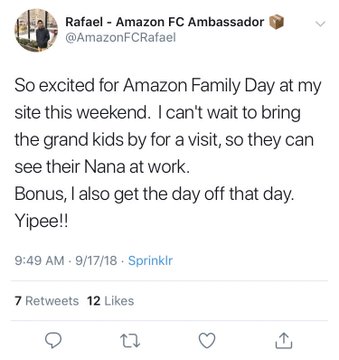 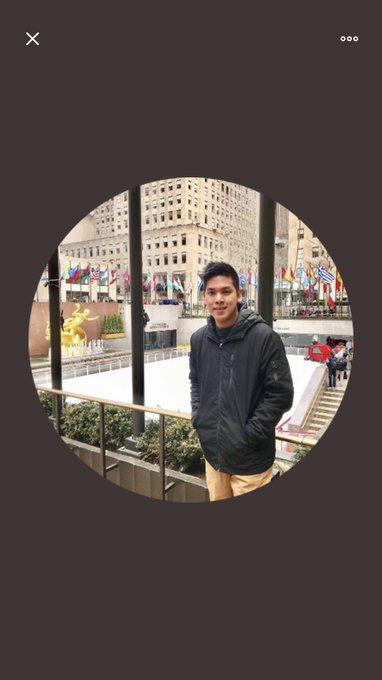 17.5K people are talking about this
Report

One widely-circulated tweet accused the accounts of being fake, and shared a post from 2018 by @AmazonFCRafael about being excited that her grandchildren were coming to visit, but the account profile picture is of a young man.

In response @AmazonFCRafael claimed those tweets were by the previous ambassador and that the accounts are used in rotation.

What are Amazon fulfilment centres?

In 2018, Amazon changed the name of its warehouses to fulfilment centres and launched the ambassador programme, as well as inviting the public to visit its centres.

It said the centres educate the public about the retailer, but critics claimed the opportunities were a bid to improve the company’s public image.

Amazon is routinely criticised for poor working practices and in July thousands of workers staged protests about pay and conditions on Prime Day – a day of special offers for subscribers.

One worker at Shakopee in Minnesota told the BBC that he has to handle an item about every eight seconds during a 10-hour day.

In response, Amazon said it “provided great employment opportunities with excellent pay” and encouraged people to compare its operations in Shakopee with other employees in the area.

The Apapa refinery, located in the Apapa port of Lagos, was inaugurated in 2001 with an installed capacity of 275,000MT per annum, the company said in its 2018 annual report.

The company’s plants are primarily powered through the national grid with generators fuelled by gas or diesel, with a combined capacity to generate 6.1 megawatts of power, according to the annual report.

“The porous borders allowed the proliferation of substandard seasoning products into the market,” Farrer added.

The company’s Chief Financial Officer, Aderemi Saka, in her review of 2018, said the 2015 foreign exchange policy of the Central Bank of Nigeria continued to stall the importation of the necessary raw materials for both tomato paste and vegetable oil.

“We continue to remain focused on sourcing both raw materials locally. Towards the end of 2018, we started acquiring crude palm oil, which will be produced and sold in 2019,” she added.

In June 2015, the CBN announced that it had excluded importers of some 41 items, including tomato paste and vegetable oil, from accessing forex at the Nigerian forex markets in order to encourage local production of the items.