Lewis Hamilton says Ferrari will be ‘very hard to beat’

Championship leader Lewis Hamilton says Ferrari will be tough to beat for the rest of the season.

Ferrari expected to struggle relatively in Singapore, having finished a minute behind Hamilton at the Hungarian Grand Prix in early August, a similarly tight and twisty track to Marina Bay.

But an upgrade to the Ferrari in Singapore made it competitive and Leclerc was able to take pole, from Hamilton and Vettel.

Hamilton said: “I’m sure we do have upgrades coming at some stage. I don’t know how much is coming, but these next few races are going to be tough.”

Hamilton remains in a commanding position in the world championship, leading team-mate Valtteri Bottas by 65 points, with Leclerc and Verstappen 96 behind and Vettel a further six adrift.

But Hamilton said Mercedes still had work to do to seal their sixth consecutive world title, which would be an all-time record.

Hamilton’s championship position was founded on a run of seven victories in the first 10 races of the season, but he has won only once in the last five grands prix.

“It hasn’t really changed much for me; it’s just as hard,” he said.

“You won’t realise how hard we work in the background. Even the races we’ve won have not come as easily as you probably perceived it.

“Of course it’s got tighter and tighter as the season has gone on. But at the same time we just have to be doing a better job. We were doing such a great job at the beginning of the year.

“We have this gap. But the gap could easily go. It is not won yet. We have to pull our socks up. We can squeeze more out of this car and team.

“Together, we can do better. We win and lose as a team and we all feel not great right now and that’s a good thing, because if anyone in the team is feeling relaxed right now, they need a talking to.

“We go to the next race and try to rev ourselves up and do a better job.”

F1 reconvenes this weekend at the Russian Grand Prix at Sochi on the Black Sea coast.

It is a track where Bottas has always been strong, but Mercedes’ concern is that the track has a series of long straights where Ferrari’s more powerful engine will give them an advantage, just as in Belgium and Italy.

There is also a long run from the start to the first corner, so even if Mercedes qualify ahead of the Ferraris, there is a strong possibility of the Italian cars slipstreaming past and into the lead.

Mayweather attended Pacquiao’s victory over Keith Thurman on Saturday night in Las Vegas, with ‘Pac Man’ later calling him out for a rematch of their 2015 mega fight, which ‘Money’ won by unanimous decision.

In response Mayweather initially posted: “I find it real ironic how every time Pacquiao’s name is brought up in the media, my name is always attached to it.

“This man’s entire legacy and career has been built off its association with my name and it’s about time you all stop using my brand for clout chasing and clickbait and let that man’s name hold weight of its own.

“For years, all you heard was that, ‘Floyd is afraid of Manny Pacquiao.’ But what’s funny is, when we finally fought, I won so easily that everyone had to eat their words!

“All of the so called boxing experts, critics and jealous American “fan base” either went mute and ran for cover or made every excuse in the world as to why I should give Manny Pacquiao a rematch.

“My take on all this bulls*** is that y’all are just upset that I broke Rocky Marciano’s [49-0] record and hate the fact that a black, high school dropout outsmarted you all by beating all odds and retiring undefeated while maintaining all my faculties simply by making smart choices and even smarter investments.

“Ultimately, I will always have the last laugh!”

He then followed up with a second post, which declared: “Let’s stick to the facts! Bob Arum is no longer your promoter, so when it comes to Mayweather Promotions & PBC events I’m the HNIC [Head N***a In Charge]!

“Bottom line, I make more money than you; I beat you, then I signed you! I was only at your fight supervising you, my employee, as any real BOSS would do.

“You made $10million for 12 rounds, when I just made $9million in under three minutes playing around in an exhibition with a pizza delivery guy!

“I beat you mentally, physically and financially! Remember, you fight cause you have to, I fight when I want to!”

Upon seeing these statements, Pacquiao put out his own replies: “You come to my fight and then use my name in a post but I’m the one that is trying to stay relevant? If you want to be relevant again…

“Excuse me Floyd, your name has not been on any of my PBC contracts.

“But if you would like to be on the next one, I will have one drawn up and sent to you.”

While Mayweather and Pacquiao’s first bout underwhelmed in the excitement stakes, some fans are now intrigued by the prospect of a rematch four years later, due to the American’s inactivity.

Others think the infamous saga is best left in the past.

.@FloydMayweather You come to my fight and then use my name in a post but I’m the one that is trying to stay relevant?

if you want to be relevant again… #MayPac2

Excuse me Floyd, your name has not been on any of my PBC contracts. But if you would like to be on the next one, I will have one drawn up and sent to you. #CounterfeitMoney 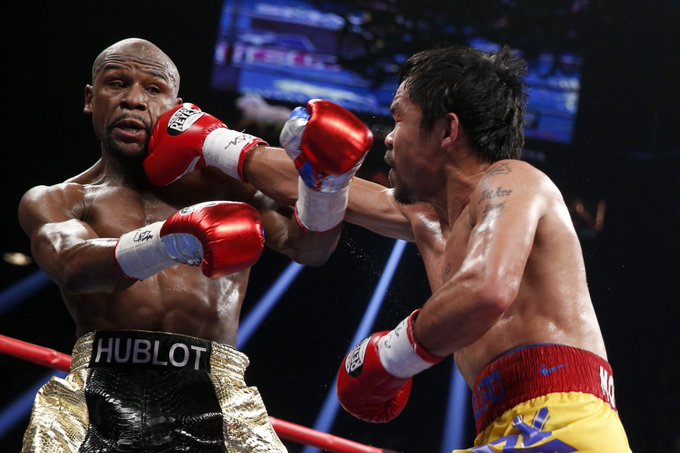 Deciding who to play, who to phase out and who to keep on side – just some of Jose Mourinho’s key early questions to answer at Tottenham.

Holding midfielder Eric Dier may well find himself in favour under Mourinho, who reportedly tried to sign him for Manchester United.

In fact Pochettino thought Dier, who was raised in Portugal, was disrespectful when he had a friendly conversation in Portuguese with Mourinho after a game in 2016.

Dier has only played three Premier League games for Spurs this season, including Pochettino’s last game against Sheffield United – when he was played out of position at centre-back. Another central midfielder, Victor Wanyama, who has managed just 113 minutes this season, may have similar hopes of finding favour again.

So too might Brazil forward Lucas Moura, the Champions League semi-final hat-trick hero against Ajax last season, who has only started four league games this season – with two of those coming back in August.

Gambling on a new McTominay or Adan

Mourinho is never afraid to make big decisions – sometimes ones that fly in the face of all logic. Some make sense in hindsight, others not so much.

For a league game against Malaga in December 2012, Mourinho dropped Real Madrid’s legendary goalkeeper Iker Casillas, who was only 31 at the time, and instead played the relatively unremarkable Antonio Adan.

Adan also started the next game – but was sent off, so Casillas won his place back. A month later Casillas fractured his hand and when he had recovered he could not win his place back from new signing Diego Lopez, a keeper of a similar age who has never been considered world class.

Then at Manchester United he picked young midfielder Scott McTominay, who had only played 204 minutes in the Premier League all season, above £89m signing Paul Pogba for a Champions League knockout game against Sevilla in February 2018.

In hindsight that was one of his better decisions at United, with the 22-year-old now one of their most consistent players. That said, it is probably best not to mention him picking McTominay at centre-back the following season in a 3-1 defeat at West Ham.

So what similar surprise decisions could he make at Spurs? Michel Vorm as number one? Drop Harry Kane and play Irish teenager Troy Parrott instead? Harry Winks at the heart of defence? We may find out on Saturday.

Keeping up his good record in opening games

Pochettino was much loved at Tottenham, so Mourinho is going to need a quick start to get fans on his side. They will want attacking football, but at the very least they will expect to move up the table from 14th position.

He has not lost his opening game at any club since his very first match as a manager, when Benfica lost to Boavista in September 2000.

Since then he has won his opening match with Porto, Chelsea – twice – and Manchester United, and drawn at the start of his time with Uniao de Leiria, Inter Milan (although they won on penalties) and Real Madrid.

However, this is the first time since taking over Porto in January 2002 that he has joined a club during a season.