Expert decries use of tissue paper during menstruation

The habit of using tissue paper in form of sanitary pads is a poor hygiene practice on the part of any woman.

Because no health policy has supported the use of tissue paper as sanitary pad, so its a bad behavior and should not be adopted health wise.

It doesnt have any credibility of use. This should be a way of informing women that it carries a serious public health risk.

The practice places such women at risk of having infection which may pass through the vagina cavity and enter the blood stream, thereby having a serious health impact, Iwalokun said.

The researcher said that the use of tissue paper during menstruation could affect the reproductive organs that could lead to other complications in life.

Sometimes it may be chronic infections that may not give serious symptoms to warrant going to the hospital, but it is indirectly damaging the reproductive system or that pathway.

One of them is the Pelvic Inflammatory Disease (PID), many women do not know they have PID until when issues of infertility comes up and untreated PID is a major cause of infertility.

It also depends on the pathogens that are coming from such paper, so it is important to identify the types of pathogen that are isolated from such tissue papers.

There must be quality study that will show the various types of pathogens, in order to identify the type of damage it can cause.

However, women should abstain from the practice of using tissue paper as sanitary pads, in order to avoid such health complications.

Women should always adopt a proper hygiene at all times, especially during the monthly menstrual period, he said.

In what does not seek to condemn those who are not virgins as prostitutes or less moral, this discourse, seeks to examine if virginity, particularly among unmarried youths is a thing of value or it is overrated.
If this article had been written in times past, it would have been counted as irrelevant as virginity, particularly among unmarried youths was need as a norm and anyone who was not a virgin was seen as an outcast. In fact, among females, their husbands being the first person to deflower them was seen as a thing of pride that usually brought a good name to the family of the bride as she was seen to have imbibed the moral trainings that had been given to her by her parents.
It is true that nowadays, it would be erroneous to say that anyone, in the case of ladies, whose hymen has been broken is not a virgin. This is because some ladies engage in sporting activities and other strenuous work which in turn causes the hymen to wear away. There are even some ladies that are born without hymens. For young men or unmarried males, it is difficult to ascertain if he is a virgin or not. It is also true, though saddening that some ladies and young men have lost their virginity due to sexual assault which they were subjected to.
However, in spite of these exceptions, it has become worrisome that virginity or sexual chastity as you may call it, particularly amongst youths has become a trivial thing. A lot of youths today have seen virginity as a stigma that should be dealt away with. Some advocates for the fact that virginity is not important argue that virginity is not a guarantee of good character. Some even argue that one’s husband being the first to deflower you does no guarantee that he is not going to cheat. However, do the forgoing reasons give us a license to be “dogs?” Do they give us a license to have no sense of morality? No!
Although many might disagree, a study showed that the chances of a husband cheating when he is the first to deflower is wife as very slim as compared to that of those who have been deflowered by different men before marriage.
In order not to be biased, young me have also thrown caution to the wind as they now sleep around at the slightest chance. The excuse they give is that they cannot wait till they get married and they are not particularly certain that the woman they would get married to has not been sampled by different men. However, is this a license to be a “dog?” Don’t you know that in the course of your sleeping around, you could contract diseases and viruses that you could pass on to other innocent women? You could also die as a result of this diseases that you would have contracted via sleeping around. While It is true that using protection can prevent you from contracting these diseases, it is also true that protection can fail and you would be in trouble. By then, would it not have been better if you had stayed chaste?
What has caused this loss of sexual chastity? The family is our first point of call. It is important to note that the family is one of the most important agents of socialization. Therefore, if there is a reduction in sexual chastity, it means that there has bee a defect in the foundation of such individuals as they have not been imbued with the necessary moral teachings that would enable them to be chaste. Although, there are some people that have been imbued with these moral teachings and have refused to adhere to them, most of the time, lack of sexual chastity can be traced to the failure of the family.
The society also shares a part in the blame for loss of sexual chastity. A society that does not count virginity as important will certainly produce people who do not see virginity and sexual chastity as important.
At this juncture, it is therefore imperative that the society and the family come together to restore and uphold sexual chastity among people, particularly youths. What is this going to do> It is going to restore morality, sexual purity, reduce the rates of divorce and rid our society, to some extent of rape.

The amount of attention you give to growing your beard is also what you need to give when grooming it.

Growing a beard is one thing while grooming it is another thing entirely. With the recent cravings for beards, it’s only right if you know how to groom it well. Remember, no good beards happen by accident, you need to put in some work.

A clean beard prevents itchiness and keeps it soft, which eventually makes it attractive. If you do not wash and condition your beard, chances are you will grow dry and wiry beards. All you need to do is scrub your beard several times each week with a specialized cleanser or a good shampoo while conditioners will soften the beards.

Always use a clean towel to dry your beards as dirty or old towels can be a breeding space for bacteria.

Trimming your beards will play a vital role in keeping your it healthy but you need to get the right tools for the job. Also, have a set time when you get to trim your beard, maybe once a week, or two weeks depending on how fast you grow. Finally, get a trimming technique that works well with your face. 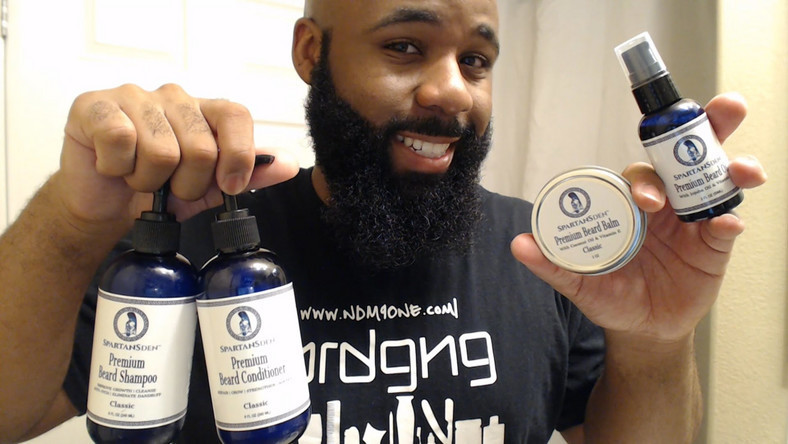 Use oil on your beards often

Using a beard oil will get your beard fluffier. It would also tame the beards as well as giving it that shinning appeal. Also, you can get these oils in a variety of manly scents. Not only are you getting nicer looking beards, you get to smell great.

Growing your beards also means your mustache will grow in the process. To keep it looking pretty, trim the area under your nose with a pair of grooming scissors and sculpt it with some medium-hold wax.

Do you know consuming the right diet contributes to the grooming of your beards? You need the food with the right nutrients that will help your beards to be well groomed. Foods that contains Vitamins B5, B3, and B9 like lean meats, nuts, egg yolks, milk, and plenty of leafy greens are good for beards.