Holders Manchester City eased into the quarter-finals of the Carabao Cup after seeing off a Southampton side who were focused on damage limitation after their humiliating home loss against Leicester.

The bad news for Saints supporters still reeling from their side’s capitulation against Leicester is that they are back here again on Saturday to face City, who are the highest scoring team in the top flight, and the Premier League champions will be at full strength next time.

Guardiola made nine changes from the team that beat Aston Villa on Saturday for this tie, but was still able to start strikers Gabriel Jesus and Aguero together for the first time this season.

There was also a senior debut for 18-year-old midfielder Tommy Doyle, a Manchester-born City fan who is the grandson of two club legends, Mike Doyle and Glyn Pardoe and, like Phil Foden, is a highly-rated graduate of the club’s academy.

Doyle and Foden joined Bernardo Silva in a City midfield that completely dominated possession – seeing 89% of the ball at one stage – and had almost total control of a game often played at a walking pace.

Southampton, whose players donated a day’s salary to their club foundation after the embarrassment of their previous outing, also made several changes.

They could not be accused of lacking effort this time – a block Jan Bednarek made to keep out a goalbound shot by Mahrez was proof of that – but nothing could disguise the fact they were largely outclassed.

‘We played so seriously’ – what they said

Manchester City boss Pep Guardiola: “This competition is good to move on the team. We played seriously and the quality of the pass was high. We arrived in the final third, especially wingers, with quality.

“Generally it was a good game other than the last minutes which can happen. We go through – quarter-finals now, and into the draw.

“You cannot win four titles in one season when you don’t care about some games or some competitions. We did it again, we played so seriously – I think that is how we played so good – and we are there.

“And for the players who didn’t play the last game, it is good for the rhythm, for myself to see they are fit and they are good.”

Southampton manager Ralph Hasenhuttl: “It was a defeat but a reaction and after a very, very difficult night on Friday to come here and play against one of the strongest sides on this planet, you can think about easier challenges to have. Always when you come here and you start, and in the first 10 mins you never know what happens.

“In the first half we were very passive. It is normally not our way to play football but I think it was understandable after the last game. It is a pity that the two goals we conceded in the first half were un-typical for City, a corner or cross is not the way they normally score, or like to score.

“In the second half you could see that we got a little bit more self confidence, we pressed a little bit higher, had a few good moments and also with the ball we had more calmness, and we showed that we could also play football.”

SINGAPORE – An Asean World Cup would be a boost to the region on numerous fronts, but a number of issues need to be addressed before a realistic proposal can be put forward.

Social media has been abuzz with frenzied discussions on the feasibility of the idea, after Thai Prime Minister Prayut Chan-o-cha announced on Sunday (June 23) that South-east Asian countries will jointly bid to host the World Cup in 2034. He made the declaration after meetings between leaders at the Asean Summit in Bangkok.

James Walton, head of Deloitte South-east Asia’s sports business group, noted that with more teams in the World Cup from 2026 onwards – from 32 to 48 – it would be difficult for one nation to host.

While this appears to work in favour of an Asean bid, the reported 10-nation proposal throws up major logistical issues, he added.

For example, the transport infrastructure in several countries would need to be overhauled to serve almost one million World Cup visitors, significantly increasing the cost of staging the tournament.

The estimated bill for 2022 hosts Qatar, meanwhile, are astronomically higher – around US$200 billion – primarily because of the need to build roads, airports and a metro that did not exist prior, said Walton.

He reckons the 2034 edition will cost at least US$20 billion to stage.

Earlier this month, Fifa president Gianni Infantino said he would welcome a bid from China, which has expressed an interest in hosting either the 2030 or 2034 tournament.

Australia, an Asian Football Confederation member, could also be an enticing option if it decides to launch another proposal, after a failed bid for the 2022 edition.

But a tournament in Asean has its allure, with tourism being one of them.

“In theory, over two and a half weeks, you could base yourself in Singapore, fly to Bangkok for a game, lie on the beach in Phuket… The tourism would be a boost to the economy,” noted Walton.

Football in the region would also benefit. Walton pointed to the example of Qatar, which won hosting rights in 2010 and won the Asian Cup for the first time last year.

“When they won the bid, people were saying they could possibly go on to become the worst-performing team in the history of the World Cup,” said Walton.

“But it gave them an impetus to focus and prioritise football in the country, and they’ve invested in training facilities, coaching… this is going to have a lasting effect.”

He said: “A successful bid… would see the global football community focus their attention on the region. This is turn will galvanise the sport here and lift it to the next level. It would be most visible in the long term… especially with improved football infrastructure.

“It would also allow the Asean football fans to come together as one as they cooperate for the programming required to host a tournament of such a scale.

“We look forward to engaging with the regional member associations to explore the feasibility of such a joint bid.”

Manchester United midfielder Paul Pogba says racist abuse “can only make me stronger and motivate me to fight for the next generation”.

The France World Cup winner was racially abused on social media after his penalty miss at Wolves on Monday.

In a message on Twitter, accompanied by a photograph showing him holding his baby alongside portraits of his late father Fassou Antoine and civil rights activist Martin Luther King, he added: “My ancestors and my parents suffered for my generation to be free today, to work, to take the bus, to play football.”

It was the first time Pogba had tweeted since July.

Twitter said it will meet any stakeholders to show the “proactive work” being done to tackle abuse.

My ancestors and my parents suffered for my generation to be free today, to work, to take the bus, to play football. Racist insults are ignorance and can only make me stronger and motivate me to fight for the next generation. 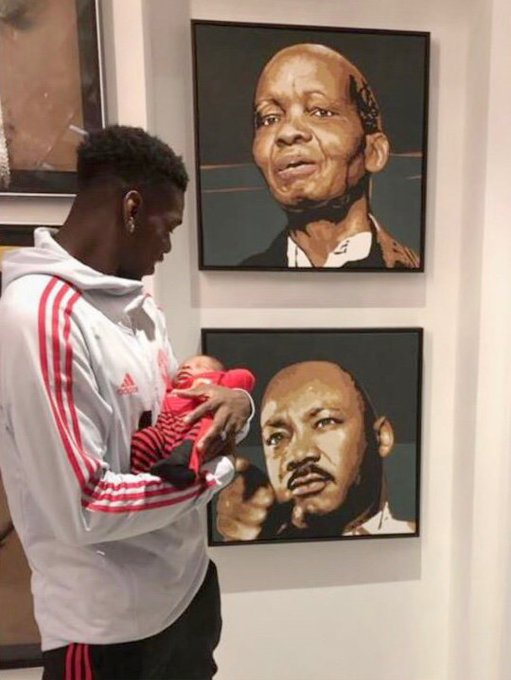