Goalscorer Jamie Vardy lauded Leicester’s “attacking talent” as his side moved back into third with victory over Crystal Palace at Selhurst Park.

The 32-year-old sealed victory with an 80th-minute goal after Caglar Soyuncu had headed the Foxes into the lead with his first goal for the club.

Second-half substitute Demarai Gray provided the assist for Vardy, while both James Maddison and Youri Tielemans impressed again in midfield.

Vardy said: “The creativity and attacking talent we have is incredible. We have so many options and it can only benefit us.”

The Foxes are now level with Chelsea on 23 points, but with a better goal difference, and just two points behind second-placed Manchester City.

They have one more point than they did at this stage during their title-winning campaign in 2015-16.

Leicester manager Brendan Rodgers said he did not want to put any pressure on his players.

“My senior players are first-class,” said the former Liverpool and Celtic boss. “The spirit is very good and they understand we are trying to create something here we can sustain.

“People asked about European football at the beginning of the season and I said, ‘listen, we don’t want to get ahead of ourselves’ because there are some incredible teams in this league.”

Turkey centre-back Soyuncu, who joined from Freiburg in 2018, has been one of the shining stars for the Foxes this season and further endeared himself to their fans with a stooping header that broke the deadlock in the 57th minute.

Vardy, who scored a hat-trick in the 9-0 win at Southampton, then sealed the away win in the 88th minute with a first-time strike after a swift one-two with substitute Gray.

Full-back Ben Chilwell came close to adding a third in stoppage time but saw his angled strike come off the inside of the post.

Mid-table Palace, who came into the match with seven points from 12, failed to trouble Kasper Schmeichel aside from a Jeffrey Schlupp deflected strike that had to be tipped over the bar by the Dane.

The Eagles remain ninth with 15 points. 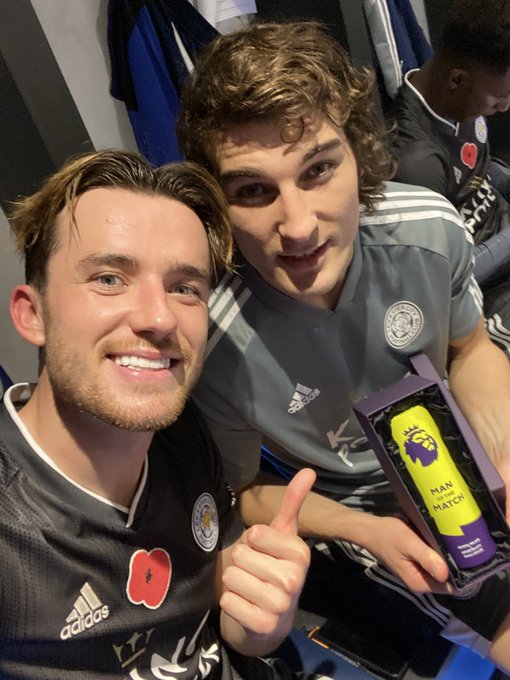 765 people are talking about this
Report

The bookies agree with Leigh and gave him odds of 300-1 this time, although perhaps a better bet is to back them to finish in the top four.

This season those heavily used tactics that brought so much success five seasons ago are proving fruitful again.

In Maddison and Tielemans they have a duo in tune with Vardy’s intentions in the same way Danny Drinkwater and Riyad Mahrez were in the title-winning season.

Maddison found the former England striker for the first chance which Vicente Guaita did well to save before Tielemans threaded a brilliant ball into Vardy’s path, only for the Spanish keeper to anticipate the danger.

Midfielder Maddison had another outstanding game. He had a direct hand in seven of Leicester’s first eight shots in the match before delivering the corner for Soyuncu’s opener.

When called upon to defend, centre-backs Soyuncu and Jonny Evans, who made one notable block to deny Wilfried Zaha, coped comfortably.

Gray’s introduction in the 74th minute added more pace to the attack and he linked up with Vardy in the area for the second, which effectively ended the contest.

It is Arsenal at home next Saturday for Leicester, but thoughts might already be fixed on back-to-back fixtures with Manchester City and Liverpool in December.

Palace struggle in attack once more

As for Palace, they performed their own miracle under Roy Hodgson when he took over just over two years ago with the team in a desperate state.

Now the 72-year-old football sage is hoping for an extension to his contract, which few would argue he has not earned.

This season his side had only lost once at home prior to Sunday’s fixture and came into the match having come from 2-0 down to draw to 2-2 at Arsenal.

But there was to be no fightback against the Foxes as once again Palace’s seemingly perennial problem in the final third reared its ugly head again.

Schmeichel only had to stretch once to ensure Schlupp’s shot did not embarrass him as the home attack struggled to make breakthroughs.

Palace have only scored 10 goals this season – the joint second worst total in the Premier League and the same number as Vardy.

Hodgson might be advised to ask for funds for a new striker during his contract negotiations.

Martin was on point with his jab, right to the body, and left hook, landing them all seemingly at will. By the end of the third, Arias had almost nothing left but will; the stoppage played wise. The referee was Harvey Dock.

Jayson Velez hit Hector Suarez with virtually every power punch possible Saturday night, from almost any angle you could imagine.

The 130-pound contender still couldn’t knock out his durable opponent. It took a ringside physician to halt their scheduled 10-rounder at 2:07 of the seventh round for him to stop Suarez.

Puerto Rico’s Velez had dominated Suarez before their fight was stopped on the Gervonta Davis-Ricardo Nunez undercard at Royal Farms Arena. Velez (29-5-1, 21 KOs) had a particularly strong fifth round, when he landed several hard right hands on Suarez (12-11-2, 6 KOs).

The 31-year-old Velez won a third straight fight since dropping a 10-round unanimous decision to unbeaten prospect Ryan Garcia 14 months ago in Carson, California. The 23-year-old Suarez is 0-7-1 in his past eight fights, but the Mexican veteran lost by knockout or technical knockout for just the second time in 25 fights since he turned pro five years ago.

The junior welterweight from Staten Island overcame a first-round knockdown, hurt Shawn West multiple times and won a unanimous decision in their six-rounder on the Gervonta Davis-Ricardo Nunez undercard at Royal Farms Arena. Robles (7-1, 3 KOs) won the bout by scores of 60-55, 59-55 and 58-55.

Robles had taken control by the third round, but both boxers landed power shots during the second half of what was a competitive contest.

After suffering a knockdown late in the first round, Robles rocked West with a left hook late in the second round.

Robles seemed to buzz West with a right hand late in the first round, but West quickly caught Robles with a right hand that made Robles stumble. Robles’ right glove touched the canvas, which counted as a knockdown.

Following those shaky sequences in the first and second rounds, neither fighter was hurt badly in the final four rounds.