Premier League referees are in “sheer panic” at how the video assistant referee system is being used, says former Chelsea striker Chris Sutton.

“Kick the monitors out as they do not like using them.”

The Premier League clarified why several of the decisions were made over the weekend, including on the Firmino goal. It also said that the decision over Alli’s handball was not overturned by VAR because it was not a “clear and obvious error” by the referee – citing the pressure Alli was under from Everton’s Yerry Mina when the ball struck his hand.

Chelsea boss Frank Lampard had a VAR decision go against his side on Saturday when Jorginho made minimal contact on Gerard Deulofeu but the penalty was given via VAR after on-field referee Anthony Taylor had said it was not a spot-kick.

“On the pitch on Saturday, there wasn’t enough for it to be a penalty,” said Lampard on Monday.

“I would work with it [VAR] at the moment and see how we improve. It is an open conversation. I think the clinical nature is a positive; it is the subjective ones we need to look at.

“The one thing we have to give the referees is that it is new. We all want better.”

Speaking on Saturday after Liverpool’s 2-1 win over Aston Villa at Villa Park Liverpool manager Jürgen Klopp criticised the decision by the VAR official to disallow Firmino’s goal for offside.

“It’s not right that we sit here and talk about it and laugh about it. Managers get sacked over it,” Klopp said.

“My analysts showed me the footage after the game and I didn’t see it as offside. We just have to make sure the new system helps the game.”

The VAR identified a clear trip that impeded Deulofeu’s progress in the penalty area and because no penalty was awarded on the field, the referee overturned his decision#WATCHE 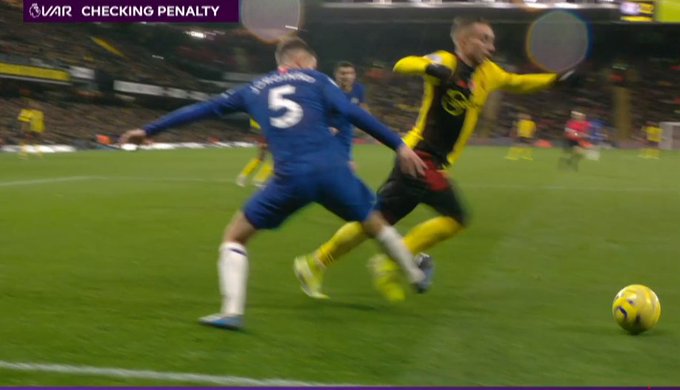 507 people are talking about this

Rodriguez, 27, has completed a two-season loan spell at Bayern and is poised to return to Real, but Matthaus told AS (h/t Goal’s Chris Burton) he recently spoke to the player and believes a move to Turin makes sense:

“We had a conversation two weeks ago, during the celebration of Bayern’s Bundesliga win. I see him at Juventus.

“He is very close to Cristiano Ronaldo and told me that he was in contact with him and that he has told him that he wants to have him at Juventus.

“I understand why as James can serve Ronaldo so that he can score and the two of them can shine.”

Matthaus, 58, earned 150 caps for Germany and made 410 appearances for Bayern across two stints in Bavaria, per Transfermarkt. He’s worked as a pundit since but remains closely associated with Bayern, where he won seven Bundesliga titles.

Rodriguez has had mixed success at the Allianz Arena, but it speaks volumes that Die Roten decided to not trigger the €42 million (£37 million) permanent option in his contract.

As for a move to Juve, the Colombia international’s father suggested in February that a reunion with Ronaldo could materialise, per Tuttosport (h/t blogger Arjun Pradeep):

Ronaldo and Rodriguez spent three seasons playing alongside one another at the Santiago Bernabeu before the latter was shipped off to Germany.

While Bayern may have passed up the chance to sign the player on permanent terms, Rodriguez scored 15 goals and recorded 20 assists in 67 appearances for the club.

Goal shared a compilation of his highlights during his time at Bayern:

Rodriguez: “My big thanks go to the entire club and the fans who have always supported us greatly.

“It was two unforgettable years for me in Munich and I have always felt very well here.

“I take the best memories and wish FC Bayern the best for the future.” 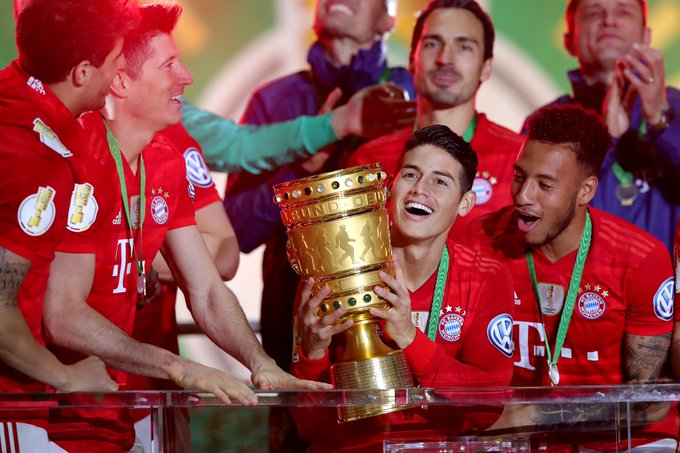 Juventus won their eighth successive Serie A title after Ronaldo joined for £100 million last summer, but the team is without a manager following Massimiliano Allegri’s departure at the end of this season.

Serie A is one of Europe’s top divisions Rodriguez is yet to play in, having already featured for teams in Spain, France, Germany and Portugal.

Kingsley Coman rounded goalkeeper Josep Gomes to give Les Bleus the lead, but Gomes then denied Griezmann from the spot.

Griezmann hit the crossbar with a spot-kick in the 4-1 win over Albania on Saturday.

Andorra have lost every single one of the 56 European Championship qualifiers they have played in.

France slip to second place in Group H despite their win, with Turkey beating Moldova 4-0 to go top by virtue of their head-to-head record against the world champions.

Iceland are three points behind the pair after losing 4-2 in Albania, who are six points below the two automatic spots.