Alex Trebek, long-time host of “Jeopardy!,” had an emotional moment on the show.

Trebek, 79, has made headlines this year after revealing his diagnosis of stage four pancreatic cancer and has been public about his battle, appearing in PSA messages and regularly keeping fans updated on his condition.

On Monday’s episode, “Jeopardy!” contestant Dhruv Gaur wrote “What is we love you Alex!” in place of his answer, betting $1,995 on the question, which he lost.

The word “love” was replaced with a heart symbol.

Alex Trebek getting choked up during Final Jeopardy today messed me all the way up. #Jeopardy #WeLoveYouAlex 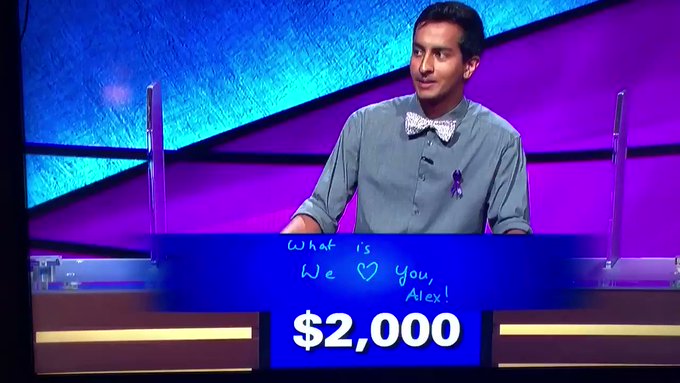 Gaur was left with $5 after the round.

Gaur was sporting a purple ribbon to promote awareness and research of pancreatic cancer.

The “Tournament of Champions,” of which Gaur is a part, is organizing a fund-raiser for pancreatic cancer research, asking fans to tune in on Thursday and Friday and donate one dollar for each correct answer given.

Arnold Schwarzenegger has said he “always” hated politics and as a former Republican governor of California “never did what the party wanted”.

Arnie is officially back in the latest Terminator: Dark Fate alongside actress Linda Hamilton, who reprises her role as the iconic action heroine Sarah Connor 28 years after she last appeared on screen.

Linda says it was not an easy decision to revisit the role.

She said: “I really thought I was done with Sarah and more importantly Sarah was done with me, because it had been so long, and that was actually the draw.

“That so many years had passed and that I felt I could use a very big paintbrush to fill in those years and take a look at Sarah today, and I knew it would be something new and therefore it intrigued me.”

Linda smashed Hollywood stereotypes with her portrayal of Connor, a super muscular, fierce fighter who helped save the world.

She’s again ripping up the rule book, doing it all once more as a woman in her 60s, but is keen to bat away descriptions as Terminator’s true cultural icon.

She said: “We don’t think about ourselves in that way – it’s just about doing the best work that we can with the character and other people assign you with those labels – icon, legend, bad-ass – but I’ll take them.”

However, Hamilton’s co-star Natalia Reyes, who plays a young woman whose experience mirrors that of Connor – hunted by a terminator from the future – says director James Cameron has always wanted to shake things up.

“Sarah Connor back in the ’80s, she was like a really strong woman, a single mother,” she says. “James Cameron has always changed the rules.

“It’s the same thing now, this film also has Latino actors and we were just all trying to reflect what’s going on in the world right now – the word is changing and Hollywood is changing.”

Mackenzie Davis, who stars alongside Natalia and Linda, says we shouldn’t get too excited about the number of women on screen, because off screen it’s a different story.

She said: “I think there just needs to be an effort everywhere and not just applaud when there’s three women in this movie. I’m so glad I’m in it but there’s lots of work to be done and there’s lots more representation that can go on.”

There’s a new development on the death of Bettie Jenifer, who was married to Ghanaian actor Chris Attoh alongside her jailed husband.

According to ABC’s affiliated digital publishers, WJLA.com, investigators are casting a wide net to try to find the suspect behind Bertie’s death. In this regard, a composite sketch drawn from witnesses narration of how the unknown gunman looks like was released by the police.

The report also stated that the investigations are not only around the suspected killer but Bettie’s Ghanaian husband, Chris Attoh, has also been questioned about the case.

A Greenbelt Police spokesperson, George Mathews said that some cryptic tweets Chris shared about relationship and loyalty some hours before Bettie was murdered, are all being considered in the ongoing investigation.

“They are aware of the tweets as well and that’s all part of the investigation,” said Mathews. He also added that the Ghanaian actor has so far been cooperating with the investigators.

Chris Attoh got married to Bettie in October 2018, in Ghana and after her death, it was discovered that the deceased was also still married to a jailed drug lord, Kedrick Jenifer, whom she had two children with.