Are Big Sean and Jhene Aiko back together? 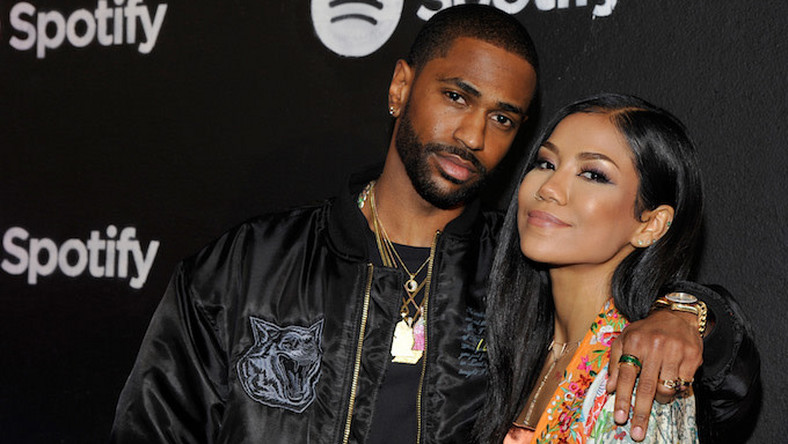 Big Sean and Jhene Aiko might have gotten back together and we are here for it.

It looks like Big Sean and Jhene Aiko’s on and off relationship might be back on the front burner as the two have been spotted together again.

The gist is that the two just released a very personal song together which has made them become hangout buddies. According to TMZ, the on and off couple were spotted grabbing dinner in Malibu Saturday, November 16, 2019, at a fancy place called Geoffrey‘s.

Big Sean and Jhene Aiko ended their relationship back in 2018 after the usual celebrity couple drama…she unfollowed him on Instagram.

Back in 2018, Jhene Aiko and Big Sean took a break from their on and off-again relationship. This time around it was Jhene who pulled the plug by unfollowing him on Instagram. [Billboard]

Back in 2018, Jhene Aiko and Big Sean took a break  from their on and off-again relationship. This time around it was Jhene who pulled the plug by unfollowing him on Instagram. She even went on to post some subliminal messages on her Instagram stories indicating that all might not be well in her relationship.

The relationship between Big Sean and Jhene Aiko looked like something that was already heading towards an end since the cheating allegations began to speculate. This is not the first time Jhene Aiko will be unfollowing Big Sean on Instagram.

The Shaderoom reports that immediately after the incident, Jhene Aiko unfollowed Big Sean on Instagram but after the news broke out, she reportedly followed him back. [Vibes]

Recall that back in March 2018, It was reported that Big Sean was sighted at an Oscar after-party flirting with former Pussy Cat Dolls star. When the news got to Jhene, it is reported that she became furious with Big Sean and confronted him.

The Shaderoom reports that immediately after the incident, Jhene Aiko unfollowed Big Sean on Instagram but after the news broke out, she reportedly followed him back. To clear the air over claims that she had parted ways with Big Sean, the singer took to her Twitter page on Tuesday, March 13, 2018, where she tweeted about it

Modern architecture and archaeology don’t typically go hand in hand. However, the two mixed in an unprecedented way when ancient ruins were discovered under what was to become the Antakya Museum Hotel in Turkey.

The project started when Turkish entrepreneur Necmi Asfuroğlu set out to build a luxury hotel on approximately 200,000 square feet of land in the center of Antioch. His land in the southeastern part of the country is entrenched in history and located near the iconic pilgrimage site of the Church of St. Peter.

When his team began drilling for a basement, they discovered a number of archaeological ruins under the site that dated back to the third century B.C. and included traces from 13 different civilizations. Asfuroğlu still wanted to build his hotel but could not compromise the ruins he had discovered, so he brought in Emre Arolat Architecture (EAA) and the firm’s New York director, Özge Ertoptamış.

“We were excited by the opportunity to do something that has never been done before,” said Ertoptamış. “But we also had our doubts whether something could actually be done around the exquisite findings.”

EAA’s outlook changed when the firm discovered an area within the site where there were no ruins. That’s because it was the former location of the Parmenius Creek riverbed.

“That is the point where we had the idea, that we could build something, not in it, but above it, by supporting the structure on minimal points where there are no ruins,” said Ertoptamış.

EAA now had a plan to marry two different typologies — a public museum where archaeological preservation could continue and a private hotel.  Ertoptamış explained, however, the design was constantly evolving and took about three years. She told Fox News about an incredible discovery when they were digging for a well, which forced her team to rework their calculations.

“There are 66 columns that the building is rising on, and each point is calculated to be on a spot with no ruins, and there are wells to support each of the 66 pillars that are dug underground by hand,” said Ertoptamış. “At one point, however, there was a discovery of a great mosaic in a location where we were going to place a column.”

The mosaic they found dates all the way back to the second century A.D. and includes exquisite panels with a myriad of mythological figures.

Well and discovery of the mosaic. (Emre Arolat Architecture [EAA])

“We had to redo all of our calculations and find a new place for the pillar, but it was worth it because it is one of the most exquisite pieces in the collection,” said Ertoptamış.

Ertoptamış explained that while her team ran into challenges, the project and history inspired her.

“The building is a product of today, a product of present, but within it, you are always living together with history in an unprecedented way, and that is the most challenging and rewarding part of this project,” said Ertoptamış.

To learn more about the building of the Antakya Museum Hotel, watch Özge Ertoptamış’ full interview above.

It is a stylized way to spell ‘Chameleon

Asides ‘Half Moon,’ a ‘wash’ song that adulates a woman’s curves and edges, and which has the perfect amount of melody required, all the other trap songs have this insufficient melody predicament. This line on ‘Half Moon,’ “The way you move you just might get this bamboo, get you out that bad mood” is merch material.

And can Alpha explain to us why he cut ‘Numbers‘ short? That felt like a Kendrick Lamar rap solo. M.I Abaga‘s verse on ‘PDA‘ is just so good. As the title intimates, the song is about ‘Public display of affection.’ Yes, that one.

‘SeeHeaven‘ is like poetic appreciation during ‘toasting phase.’ Ghost is perfect for this song because nobody does female adulation on wax like him. But then, I question if it would have been better as Track 9. You have to be her man first before you can explore ‘PDA.’ Equally, I don’t think Oxlade should have been featured on that song.

This takes us into the best song on Chvmeleon. It is titled, ‘Calm Down’ and it features the madness of GoodGirl LA. Word on the street is that LA thrives when you challenge her. If Alpha had known, he wouldn’t have told LA that the first version she recorded not good enough. But then, maybe he would have regardless.

The result of LA’s anger is one of the best rap-sung collaborations of 2019. Rappers don’t often get outclassed, but this is LA’s moment. On his own, Alpha allowed LA to shine with his verse delivered in near hushed tones . He addresses infidelity, breach of trust and fake love.

‘ThisMoney‘ is the track that actually needs an Oxlade hook. As good as this song is, Oxlade could have made it single material. Based on the two sequential parts to Chvmeleon both sonically and topically, this writer thinks ‘ThisMoney‘ might have been better as a Track 8. This way, it ushers in the afrobeats sound and ends talk of money, vanity and success.

Then, Chvmeleon can take on topics of love, sex and heartbreak. After ‘ThisMoney,’ we get the ‘Outro’ on which Alpha spits some real. In Igbo, he talks about how being good at rapping is only good enough when you’re making money. He claims that being good at rapping will only get you compliments when money is more important.

He also calls ‘compliments’ “rubbish.” Honestly, this is refreshing and it explains the more commercial approach to Chvmeleon and why it is named thus. Alpha understands that bars are important, but money is ‘importanter.’ It’s wonderful that he realizes this important fact this early in his career.

Chvmeleon might not taking him straight into mainstream, but because of the album, success now seems more achievable than ever. We might argue that Half Price is better, but Chvmeleon is what Alpha needs.

Did he execute the vision? Oh yes, he does. Is Chvmeleon perfect? No. Is the project enjoyable? Absolutely. Nice one, Alpha. But we cannot call Chvmeleon excellent. Largely, most of the tracks are promising, but without the required ‘x factor’ to truly be great.