Chelsea boss Frank Lampard insists he is not “Mr Tough Guy” despite imposing a strict disciplinary code where players face a £20,000 penalty if they were late for training.

revealed a variety of punishments including paying £500 for every minute someone is late to a team meeting.

Lampard says he first consulted his players about the fine structure.

“It might sound harsh but it’s not harsh if you’re not late,” he said.

“My only concern when that came out was it makes me look like I’m trying to be Mr Tough Guy. I’m not.

“The players were part of the process. I’m not here to be a dictator and make things difficult.

“We spoke with the players and I gave the list to Cesar Azpilicueta when we set out the fines.

“Maybe the numbers were chosen by myself to a degree.”

Have you ever faced a similar (cheaper) fate?

Whether it’s your local sports team, in the office, at university or anywhere else, we want to hear your funniest fines stories! 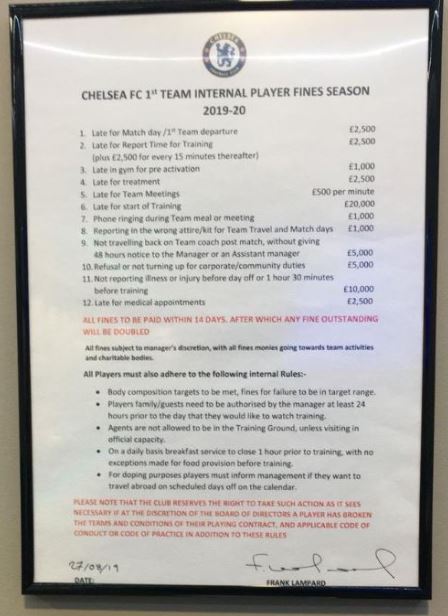 387 people are talking about this
Report

The money collected from the fines will be given to charity and Lampard, whose Chelsea side face Manchester City on Saturday (17:30 GMT), is confident his players are happy with the system.

He added: “If you talk about coming late to training, we arrive at 10 and we start training at 11.

“If you’re late for training you’re effectively an hour and 15 minutes late without any excuse, that’s quite a big deal if you’re preparing for a game against Manchester City on the next day.

“I know the fines are relative, people can have their own mind. But the players are certainly big in the setting up of that and I think it’s important to have discipline in the workplace.”

Despite their late comeback, United have won just one of their past 11 Premier League …