Premier League champions Manchester City got back to winning ways by coming from behind to beat in-form Chelsea in an entertaining game.

However that 21st-minute goal would prove to be Chelsea’s final shot on target of the game.

There was a degree of fortune to City’s equaliser. David Silva’s pass to De Bruyne took two deflections, including one off Zouma, to find the Belgium playmaker, whose shot – which looked as if it was heading for Kepa – also hit the France centre-back and leave the keeper helpless.

From that moment, City were on top and Mahrez produced a wonderful effort to give them the lead. The Algeria winger was fed by Rodri down the right, skipped between two defenders as he cut in before firing a shot between the legs of Tomori and into the net.

City’s fightback should have been even more comprehensive when Kepa passed the ball straight to Aguero, but the Argentina striker lifted the ball over the Spain goalkeeper but off the bar.

“We were controlling the game,” Chelsea boss Frank Lampard told BBC Match of the Day. “We were playing some great stuff and we felt in control but you can’t be absolutely in control against Manchester City.

“It was bad luck for their first goal, and absolute quality from Riyad Mahrez for the second and that changed the game.

“Maybe we were a bit slow with our movement at the back. I know we were giving them a good game but I am disappointed with the small details.

“If you look at City they are an example, and we’re at the absolute start of that process. A few of our players were in the Championship last season, but we want more.”

Drama at both ends in dramatic finish

Guardiola’s side did enough to see the game out after the break, restricting the visitors – who had won their previous six Premier League games – to only five shots, all off target.

The hosts had most of the second-half opportunities – despite their unusually low amount of possession – with De Bruyne, Fernandinho and Phil Foden all having shots saved by Kepa.

However Chelsea were inches away from equalising in injury time when substitute Mason Mount’s 30-yard free-kick went just wide.

Seconds later City were celebrating for a third time as Mahrez headed the ball on for Sterling to blast home – but a VAR check ruled that the England forward was marginally offside. 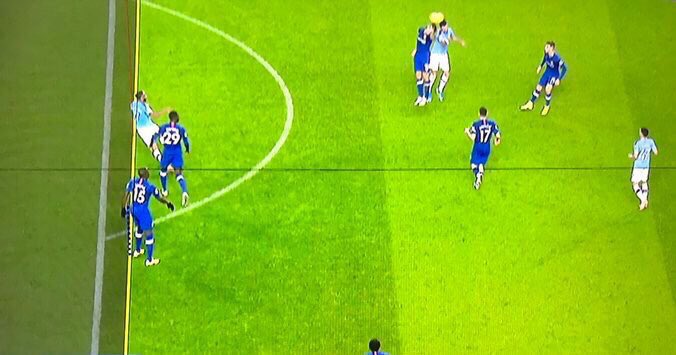 9,129 people are talking about this

Funsho Damilare is a student microbiology,a versatile writer and a lover of Fashion and trends!
Previous Gareth Bale receives mixed reaction at Bernabeu in Madrid win over Real Sociedad
Next Marco Silva: Everton boss fighting to save job after Norwich defeat