How to Tie a Tie: 7 Knots for All Occasions

Whether for business or social occasions, certain ensembles look better with a tie. Located underneath the shirt collar and knotted at the throat, a straight tie brings a level of professionalism and elegance to a suit, vest, or shirt and slacks. Although clip-on ties may seem like the easiest route, hand-tied straight ties are the most attractive option. Knowing how to tie a tie can open up a number of new styles and looks. With six tie knots to choose from, there’s something for every neck size and shirt style. If you prefer an easy knot, we suggest starting with the full Windsor. Our videos and simple instructions allow men and women to sport a polished tie in minutes. People should practice tying knots in front of a mirror for best results. 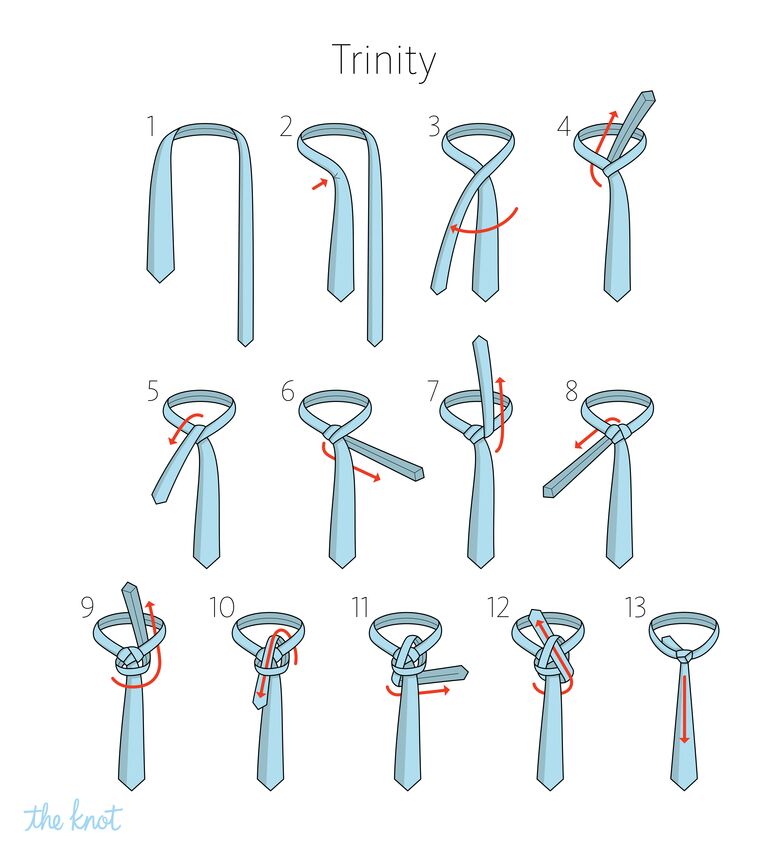 How to Tie a Pratt Knot

Also known as the Shelby knot, the Pratt knot offers a stylish look for any dress shirt. Because this knot is thinner than the Windsor knot, it works well when fashioned with lightweight to medium-weight ties. The Pratt knot requires just a few simple steps to master. 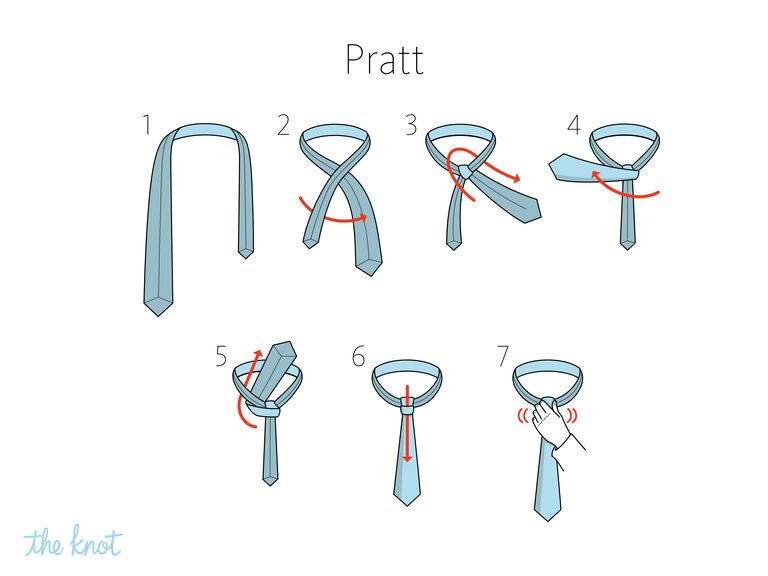 How to Tie a Kelvin Knot

This uncommon knot will certainly set you apart from the crowd. Thankfully, Kelvin knots are easy to learn and create an even, polished look. Follow a few basic steps, and you’ll be a Kelvin knot expert in no time.

How to Tie an Eldredge Knot

With its intricate design, the Eldredge knot makes a bold statement. Fair warning: learning how to knot a tie in this style can take time. While tying this knot involves a variety of steps, the process is not as complicated as it seems. While some knots are created with the wide portion of the tie, this knot is fashioned entirely from the narrow portion.

Eager to go beyond the basics of how to tie a tie? Men or women who wear ties may wish to enhance function and fashion with tie accessories. People can choose from various types of tie accessories to keep ties in place and add a hint of style. These options are great for anyone hoping to create a signature look or elevate their typical fashion.

By presenting a polished look for work or social occasions, neckties enhance the wardrobe of men and women. Straight ties come in an array of patterns, colors and fabrics for every season and situation, and a variety of different tie knots keep them looking sharp.

A small study suggests that eating all of your meals earlier in the day may suppress hunger and boost fat reduction.

In recent years, a growing number of people are trying intermittent fasting

as a strategy to lose weight.

Intermittent fasting is a term used to describe several eating patterns in which people cycle between periods of fasting for 12 hours or more and periods of eating.

Early time-restricted feeding is one type of intermittent fasting in which people eat all of their meals during the morning and early afternoon before fasting for the rest of the day.

According to a new study published in the journal Obesity, early time-restricted feeding may help curb appetite and promote fat burning.

“Prior to this study, we had evidence that both intermittent fasting and eating earlier in the day help with weight loss, but we didn’t know why they seem to help,” Courtney Peterson, PhD, lead investigator of the study and assistant professor in the department of nutrition sciences at the University of Alabama at Birmingham, told Healthline.

“The main goal of this study was to learn whether these meal-timing strategies help with weight loss by helping people burn more calories, by lowering their appetite, or both,” she said.

To conduct this study, Peterson’s research team enrolled 11 people who had good general health but were considered overweight, with a body mass index between 25 and 35.

Each participant tried two meal-timing schedules for four days each. Participants ate the same types and amounts of food while following each schedule.

The researchers found that when participants ate all of their meals between 8 a.m. and 2 p.m., it had no effect on the number of calories they burned — but it did appear to reduce their appetite.

“What we found is that the hunger hormone, ghrelin, was lower in the morning and tended to be lower in the evening [when people followed the early time-restricted feeding schedule],” Peterson said.

“We also found that the desire to eat was lower when people tried early time-restricted feeding, and the only time of day when they were hungrier than the comparison schedule was right before bedtime, around 10:30 at night,” she continued.

Although more research is needed, these findings suggest that coordinating mealtimes with the body’s circadian rhythm might help curb appetite and support weight loss.

“Data suggests that you have this internal biological clock that makes you better at doing different things at different times of the day, and there are a bunch of metabolic processes that are a little more efficient in the morning,” Peterson said.

A larger eating window may be more sustainable

In the meantime, she suggests that many people might find it easier to follow a meal-timing schedule with a larger eating window than the specific schedule they studied.

“We were trying to take an eating schedule that we thought would maximize the benefits, so we tested six-hour eating periods with 18 hours of daily fasting,” she said.

“But the data that we have from studies in my lab and other peoples’ labs suggests that 8 to 10 hours is a better target for many people to aim for,” she continued.

Not right for everyone

Some people might find early time-restricted feeding helpful for managing their appetite or weight, but experts warn it’s not the right approach for everyone.

“Athletes or anyone who is fairly active may have a hard time with this, depending on when they eat and exercise,” Liz Weinandy, MPH, RDN, LD, lead outpatient dietitian in the department of nutrition services at Ohio State University Wexner Medical Center, told Healthline.

“Other potential barriers would be if a person has a condition that requires them to eat more frequently, like diabetes,” she continued.

People who are pregnant or managing medical conditions such as cancer may also find it difficult to meet their nutritional needs while only eating during short windows of time.

Intermittent fasting may make it harder to partake in meals with family members and friends or navigate social situations that involve food.

“This style of eating may also lead to an unhealthy relationship with food,” Caroline West Passerrello, MS, RDN, LDN, a registered dietitian nutritionist and spokesperson for the Academy of Nutrition and Dietetics, warned.

“Therefore, anyone with a history or an eating disorder should avoid this approach,” she said.

Before they try intermittent fasting, Passerrello encourages people to speak with a registered dietitian.

Weinandy advises interested clients to start with an eating window of 12 to 14 hours before trying more restrictive fasting schedules.

She also encourages people to avoid skipping breakfast and pay close attention to how they feel while fasting.

If someone develops signs of low blood sugar while fasting, it may not be the best approach for them.

Some people may also eat more during their eating windows to try to limit hunger later on, which can potentially lead to weight gain.

Many things can affect your blood pressure through the day, so your doctor will take a number of blood pressure readings to see that it stays high over time.

In general, a healthy person should not consume more than 2,300 milligrams of sodium per day. When it comes to sugar, the main concern is avoiding “added” sugar. Our bodies need sugar to function properly, but most of it should come from sources like whole fruit rather than candy or even juice.

Packaged meats including hot dogs, bacon, sausage, and lunch meat also rely on sodium to preserve the product for a long time. Instead, buy your meat straight from a butcher to get a fresh product that hasn’t been soaked in a giant vat of saltwater.

Did you know that the food in frozen meals may have been cooked up to a year before you actually eat it? A massive amount of salt is used to make sure the meal still tastes mostly like food by the time you eat it.

Some brands do use high quality, low sodium recipes, but you will have to pay more. Another option is to prepare several servings of your favorite meals and freeze them yourself in single-serving containers.

Just one soda per day can push you over your daily recommended limit of added sugars, yet because you drink rather than eating them, they don’t make you feel full or satisfied.

And while caffeinated soda boosts your energy and vitality upon consumption, that feeling is very short lived and leaves you even worse off after the inevitable sugar crash.

Cookies, cakes, donuts, and other baked goodies can certainly be a hard habit to break, but they are simply loaded with sugar and fat. However, you may still be able to enjoy pastries in moderation.

When eating out, share one dessert with the whole table. When you cook at home, you can make use of a sugar substitute such as applesauce, dates, or Stevia.